Carnage, chaos and elbows at dawn, the show hadn’t even started and already the buzz and drama surrounding Pam Hogg’s SS13 show was astounding. With a queue longer than that for a festival toilet, there were pushers, chancers and those who dropped out due to the wait and sheer magnitude of the crowd. However, for those will a little more stamina like (oh hello), I tolerated the army of Pam’s friends, family and celebrity followers let in before us to ensure I made the most of my seated ticket.

After much anticipation following her growing mainstream recognition, even recognised by national newspapers due to her recent wedding dress endeveours, Pam Hogg’s latest collection at Vauxhall Fashion Scout was greeted with sea of excited curiosity. With the despairing title, ‘Save Our Souls’, intrigue was at its peak as the lights plummeted the restless crowd into silence.

A single spot light revealed the first figure, sinister and writhing, barely concealed with a kind of bandage and brandishing two small flash lights in the pitch black. Here we go. SS13’s Save Our Souls display starts as it meant to go on, as the lights are poignantly reminiscent of distress signals, with the bandages and broken movement depicting the fragility of the soul in such a way that raised the hairs on our necks. As the lights return even brighter than before, a familiar face in the form of Alice Dellal appears, seemingly as a nurse with an expression dead behind the eyes. 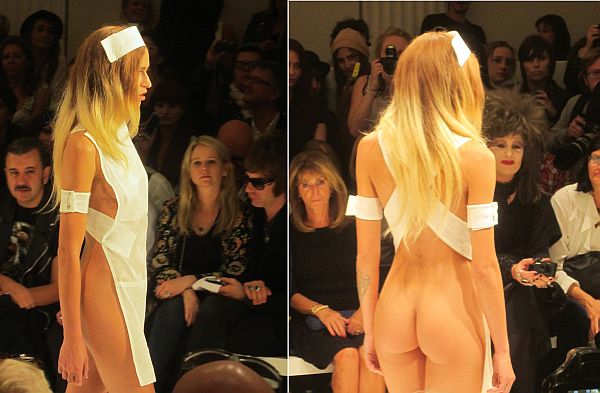 Wearing a completely backless, white apron-dress; cuffed at the arms and composed in sheer fabric keeps the shock element in full swing. The following sequence of models sported outfits of a similar clinical style, adorned with statement zips and pins to provide a typical Pam edge over the comforting familiarity of a person in care. 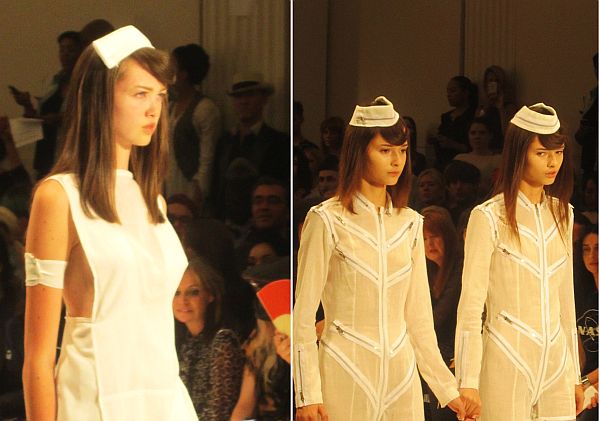 Stepping away into classic designer territory, nurses are replaced with what I like to think of as Disco Space Babes. Bold flashes of pink and orange, blue and green are present on skin-tight lycra textures , laced with metallics geometric designs. High definition pops of colours were offset with space age thigh-highs, capes and skull caps, feeding into the alien nature. 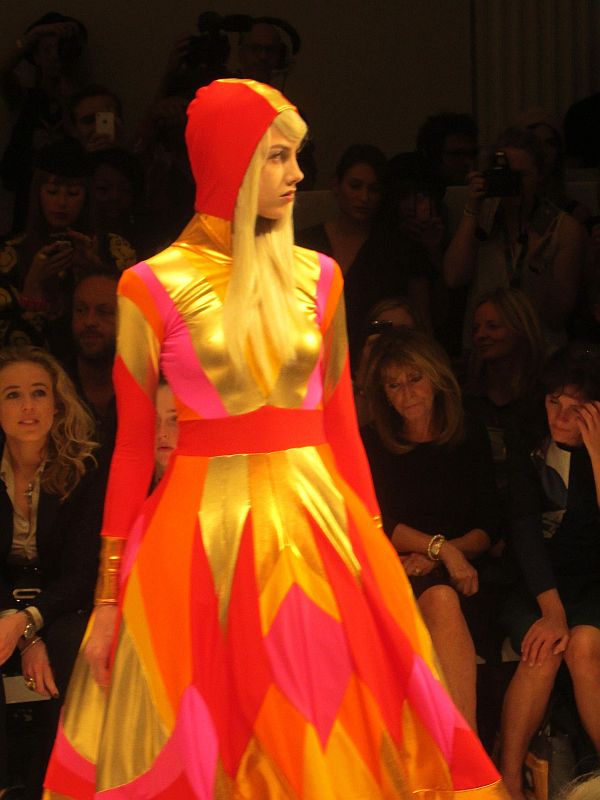 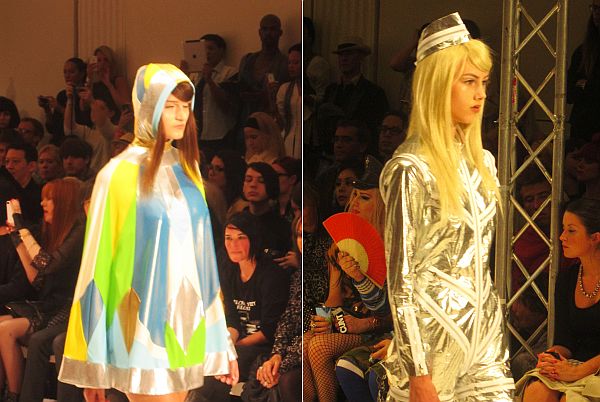 Keeping things fresh, the collection entered its final trimester, replacing the extra terrestrial with intricate head pieces and bold formations; the soul coming full circle to embody strength. Grandiose ruffles and sequins married with pink tulle cuffs and constructions, again barely concealing the body but very much revealing the soul. As Alice Dellal took to the runway for her final look, a healthy round of applause sounded out for her ensemble – a black cage for a skirt complete with exposed ribbing and sheer fabric, complimenting head wear fanning out above her. Arms outwards possibly for effect and most definitely her own balance, she sashayed her way down to the end to provide the story’s conclusion. 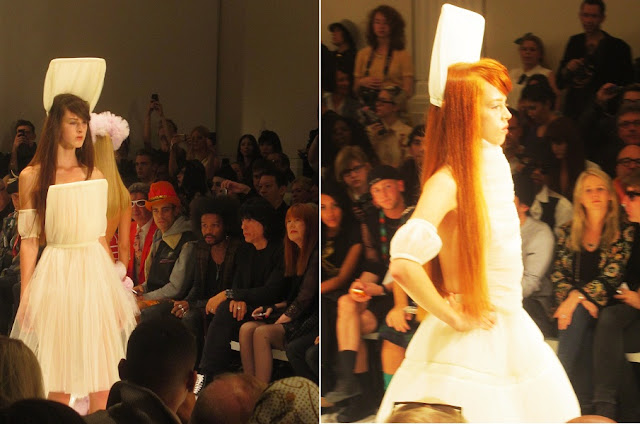 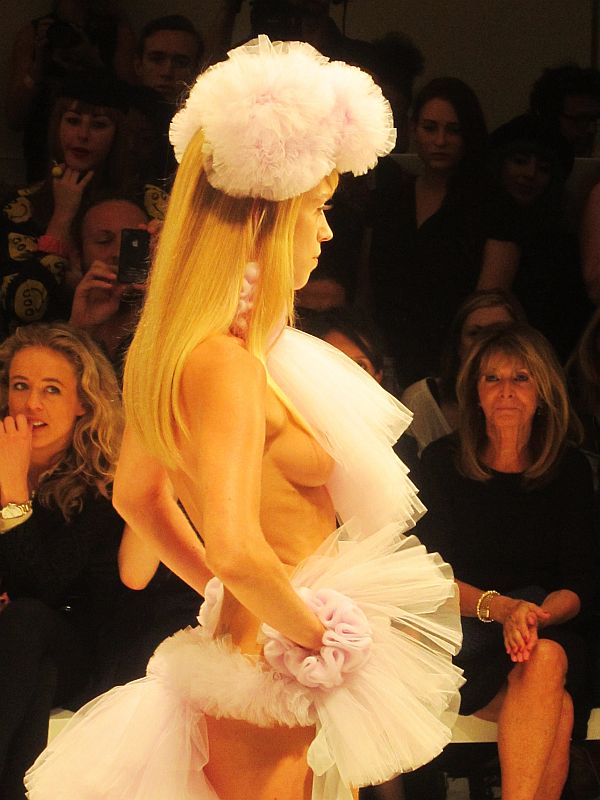 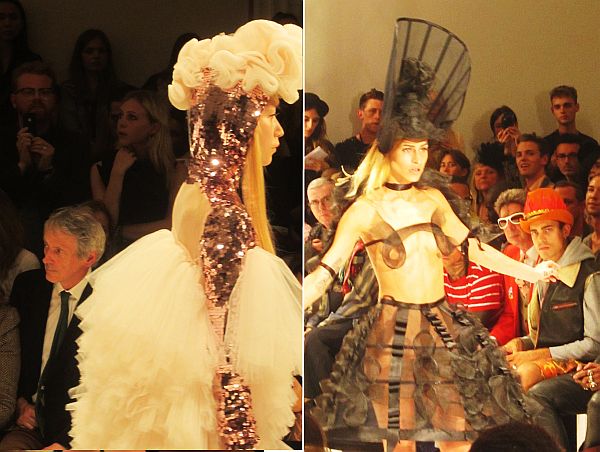 Plunging into darkness once more, The Only One’s – Another Girl, Another Planet appropriately blared out as guests including Nick Cave, Bobby Gillespie and Fred Butler clapped their approval. Walking arm in arm with her majestic looks and delirious models, Pam Hogg delivered another out-of-this-world experience guaranteed to leave the audience clawing at the doors to get a look in next season. Expressive, inventive and almost poetic in its execution, you can guarantee I’ll be first in line.

And I was in the same room as Nick fucking Cave.