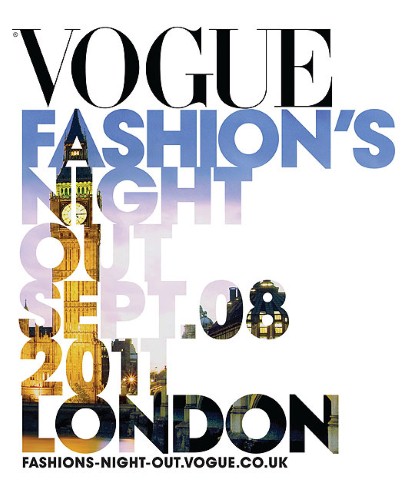 Having been on Oxford Street from lunchtime onwards, the preparations for Vogue’s Fashion Night Out were well under way for the event anticipated to have everyone on the street desperately seeking shopping.  From the lavish handmade displays busily erected in Selfridges to the deliciously saccharine aroma of freshly made popcorn hanging in the air at, this year’s new kid on the block, Covent Garden,  it was hard not to feel just a little bit giddy at the thought of what the evening would hold. And the feeling was mutual as hoards of sharply dressed ladies with an apparent minimum height requirement of 5”8’, and gentlemen took to the street at 6pm sharp to set their hands and eyes on the latest launches, free samples and signature cocktails London had to offer.  I, of course, hadn’t bargained on my vintage holdall strap giving way at 6.30pm (a slight faux pas swiftly covered up outside Paul Smith before any eye witnesses could step forward) but that wasn’t going to stop me joining the masses, armed with friends from home and the North, to make the most of what was set to be an evening to remember. 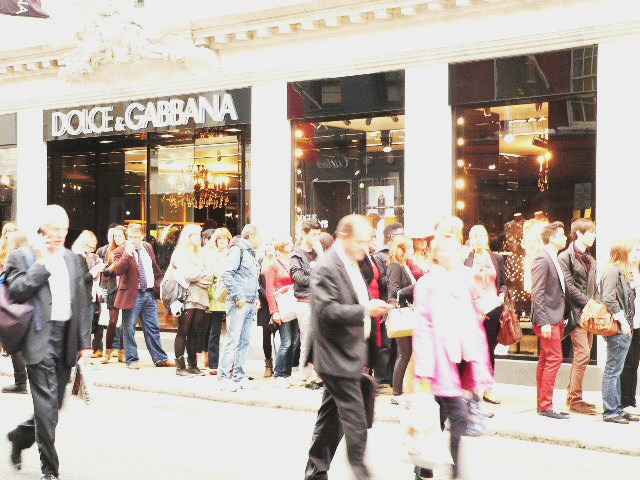 As I alighted at Green Park and made my way to New Bond Street for 6pm, I laid my eyes on one the one and only Alexander McQueen. With a queue reaching all the way down the road, it was clear to see that having a 7pm appointment at Liberty would be preventing me from making my way inside and from getting my itchy fingers on the Tote bag that I can guarantee each person standing in line was hoping would be leaving on their arm. As I stood on the periphery snapping at the crowds, the feeling of a Hollywood premiere was hard to shake as the cordoned red carpet and next door’s Dolce & Gabanna flashbulbs created an ambience of Hollywood glamour despite the city’s overcast skies.

“Is this to do with the riots?”, a young Italian man stops to ask me.
“Technically no but give it an hour and my answer may change“, I respond.


The stylish young women had a glint in their eye that suggested they wouldn’t be going home empty handed and were willing to jab their elbow into a rib or two. 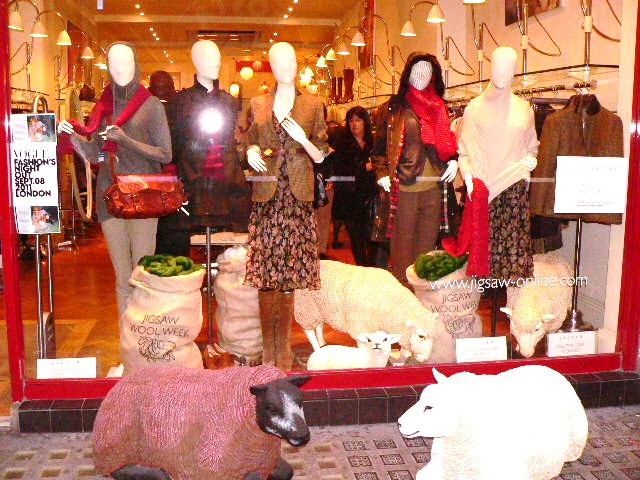 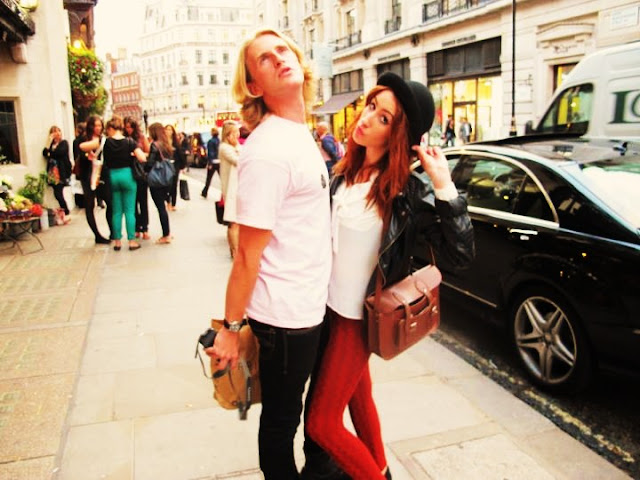 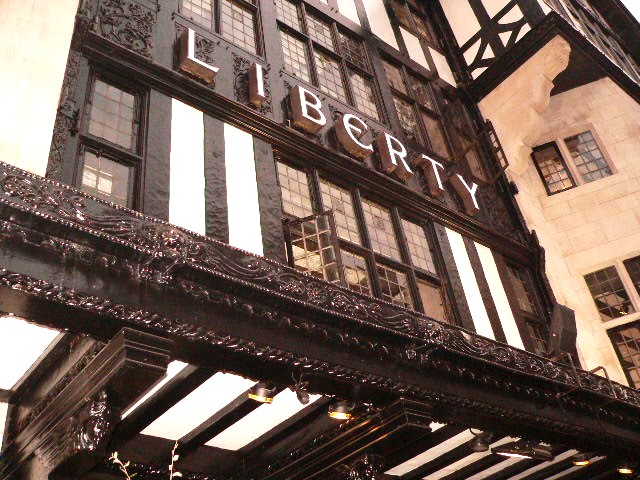 After a short stop in Covent Garden for a peek in Elemis, it was pink champagne and manicures all round. However, with barely enough room to swing a Chanel 317, it was too small to me to function so i left the gaggle of giggling blonde women hoping for a post-work hand massage and heading to my first ‘Must See’ destination on my list: Liberty.  My mother married in London in 1973  donning a Liberty print maxi dress (who was wearing a curious double denim ensemble – oh, the glory days.), so my interest in the 1875 established fashion and furnishing house has been embedded into me from a young age and i can’t wait to get inside. After being photographed for beauty favourites GlossyBox and their FNO album, I simply had to stand back and admire the very presence of the store. Its Tudor revival visage is beautifully complemented by a host of flowers providing a colour-pop of vivid brights.  However, on this night, this countrified decadence does not extend beyond the corsage making stand at the front door for on the upper level, the Honolulu lounge is in force. Well, that’s what it said on paper. I may be inclined to suggest that nestled amongst a myriad of designer displays was a humble Tiki shack but that’s not to say that the Pina Coladas and raspberry rum cocktails weren’t enough to transport us somewhere exotic. As visitors sipped from pineapples, Hawaii’s finest waiters (or close enough) were on hand to chat and deposit the Honolulu must have accessory: the tacky flower garland. As i meet my beautiful friends and discuss our plan of action, Henry Holland decides to make an appearance and have himself a drink which I’m positive didn’t involve joining the queue! One day, one day... 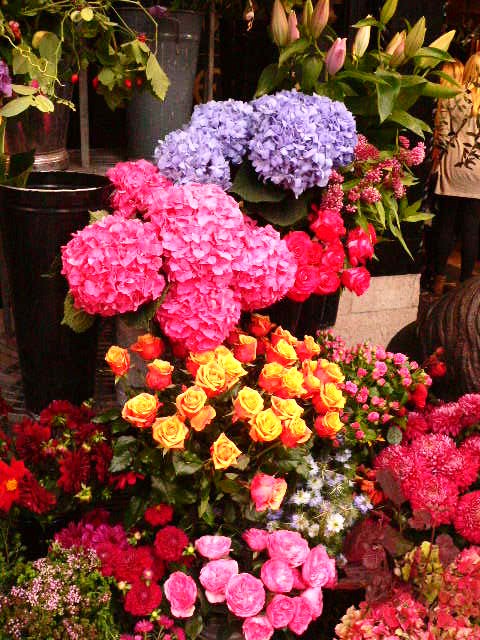 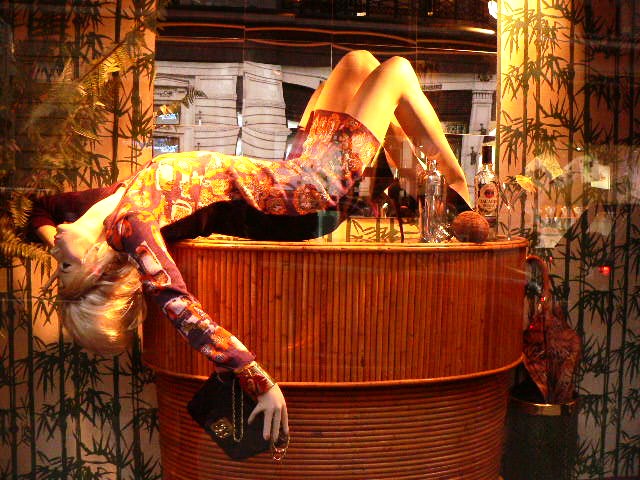 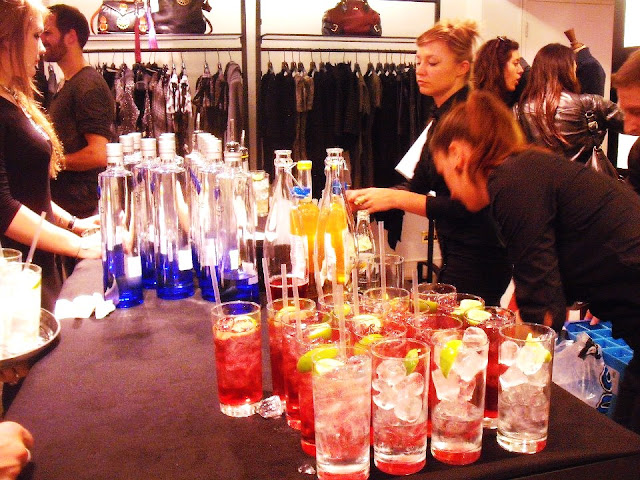 Next stop: Diane Von Furstenberg. With the promise of not one but two signature cocktails and as assortment of canapés, this has ‘must see’ scribbled next to it on Beca’s list. After a short hobble up the cobbled streets, we arrive and Oh. The drink isn’t exactly free flowing and there isn’t an edible indulgence in sight... However, despite our stomachs moaning at the culinary defeat, our eyes all fall to a fashion masterpiece: a blue and silver feather and fine beaded cocktail dress. Beautifully made and just the right side of heavy, this dress was, in a word, stunning. Well, from the Queen of the Wrap dress, we’d expect nothing less. All three of us, although different in style, all squealed in envy at a dress we couldn’t afford and would never wear. But goodness, isn’t it beautiful? Elsewhere, a tree adorned with t-shirts and colour coordinated rails of beautiful faux fur coats and silk blouses perfect for work wear brought the store to life as a crush of onlookers make their way to the back of the shop for a photo op with the designer.  However, as a selection of Haagen Daz Praline and Cream makes it way towards us, we’re still pining after a drink (unlimited vodka for all in Vivienne Westwood seems so long ago) and we head on. 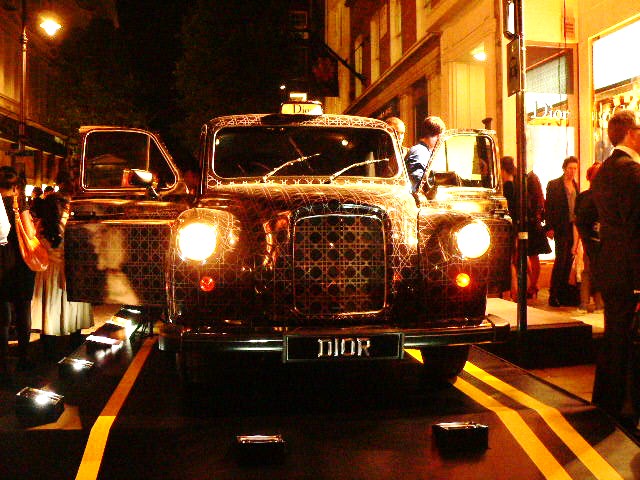 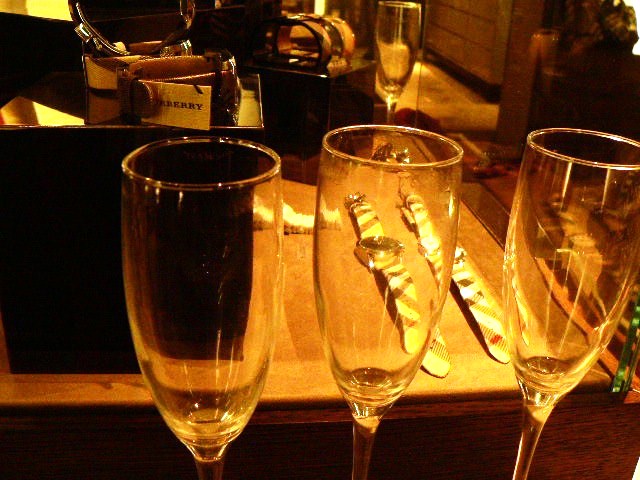 With queues for Mulberry still as ridiculous as ever, and Dior, having assumed a rather snubby and exclusive roped off area, keeping further shoppers away, Burberry shined like a beacon of hope in the heaving street. And it delivered no end. Packed with the beautiful and the drunk, the Champagne was flowing and the new Burberry Body scent exquisitely lingered  in the air at undeniably one the happiest locations on the walk. Rosie Huntington Whitely festooned every wall in between immaculate displays of handbags, watches and scarves as young girls, wearing the Burberry uniform trench, chatted away to their male friends and admired the display. From sultry pouts to lightheaded chuckles, the crowd was diverse, friendly and enjoying the show. 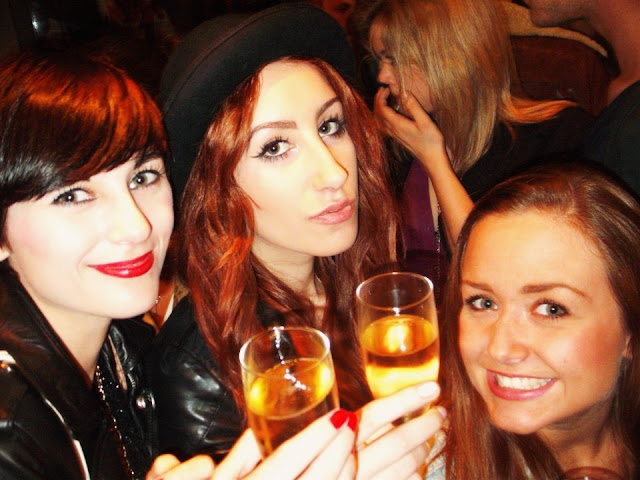 Beca, Myself and Sophia making the most of Burberry
However, the undeniable hot spot for the evening was Coach to celebrate the launch of their first ever European flagship, which coincides with their 70th Anniversary. From the outside, the simple and flawless white front and simple silver detailing make for an inviting lure as the crowds heaped upon each other to catch a glimpse of what was inside. And who should be inside but the main pull of the night, their spokesmodel, Mrs. Gwyneth Paltrow. Dressed in a rather subdued black jumpsuit (gorgeous as it looked, something a little more outlandish for the occasion wouldn’t have gone a miss), she stopped on her way in to sign autographs for the fans that had been gathering for some time. Other celebrity spots for me personally included Pixie Geldof browsing the wares of Stella McCartney and Matthew Williamson himself. Eek! 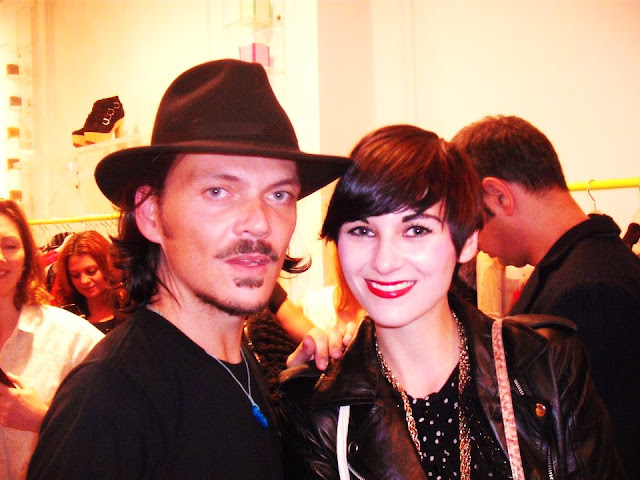 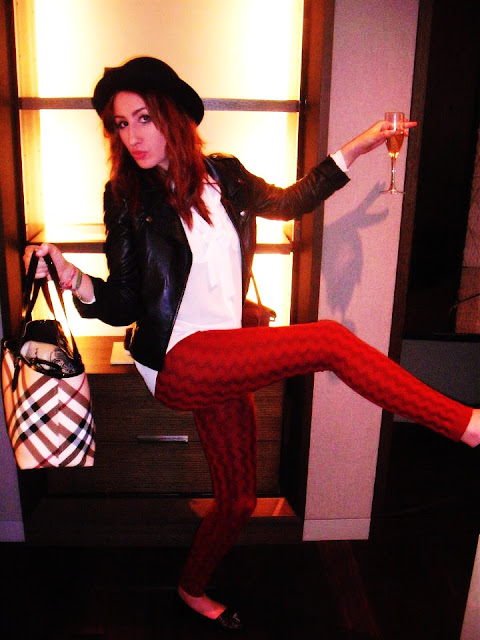 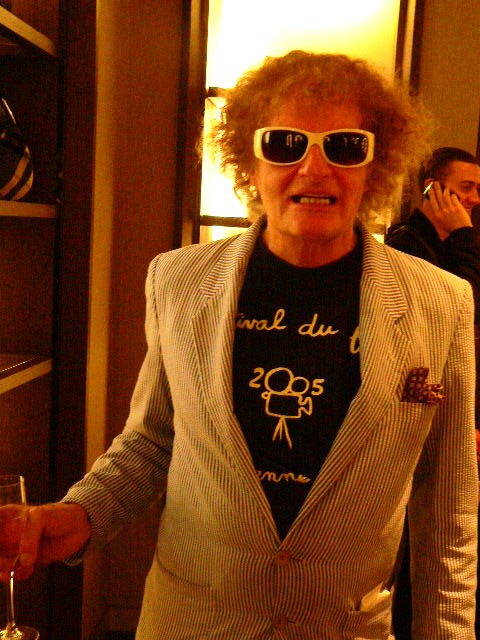 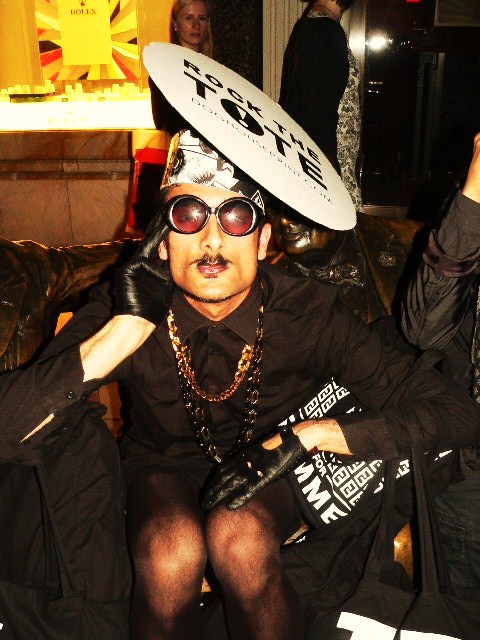 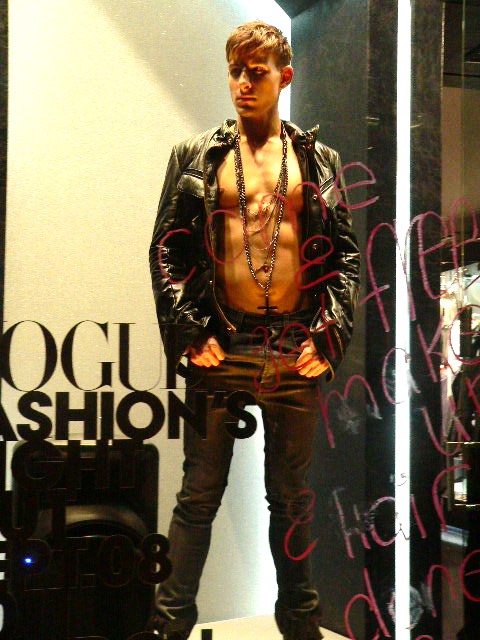 My original and hilariously ambitious list may have fallen short on a few locations such as Mulberry – sob! – but the likes of Burberry made it all worthwhile as we perused the designs and caught up together after a long absence from one another. And isn't that what fashion night out is really about? It truly is the perfect excuse to meet up with friends and justify the consumption of girly cocktails and miniature treats whilst feeding your garment envies and satisfying your fashion lusts. And with London Fashion week just 7 days away, it has been the perfect starter for what is set to be a hefty main course. I’ll be covering Fashion week’s big shows and new talents for Who’s Jack Magazine as well as eavesdropping for the Miss V style behind the scenes blog so I better start sussing the ins and outs of my wardrobe now. Can’t strike up a conversation with a designer and be dressed in an ensemble resembling their off cuts now, can I?
Posted by littlemyth at 09:02