As the sun finally rears its head and the tail-end of Katrina apparently subsides for the time being, I've been busily gearing up for London Fashion Week and to say I’m a little excitable about the days ahead could be somewhat of an understatement.


For those of you who don’t know, I’ll be blogging on behalf of Who’s Jack Magazine  to provide daily coverage for some of the big name fashion moguls and, more importantly, giving exposure to some of the finest as-yet-unknown designers the industry has to offer. And as the weekend schedule arrived in my inbox this morning, let’s just say the day was off to a good start as I can now look forward to situating myself at the shows of some dynamic and unusual bright stars set to make their mark in the coming months. I’ll also be running a behind the scenes blog, snitching on my fellow man on any interesting garble that comes from their autumn plum coated mouths. At the initial Jack meeting, the team were issued strict, but I think you’ll agree, fair, instructions not to overdo it on the free champagne cocktails and then vomit on Henry Holland. However, always to be an exception to the rule, I am allowed such a privilege (Don’t tell Henry) as long as I take a high definition photograph and write down the details of the fiasco as ‘gossip’. They say all press is good press but I can’t see that doing me any favours....

With just two days to go, let me share a few details of my whereabouts for the weekend. I’ll be sat, camera in hand and scribbling into my notebook for John Rocha on Saturday but here’s a few other main schedule events that have really got me on the edge of my seat to be on the edge of my (not quite front row) seat:

Citing her SS12 inspirations as “Seahorses, Greek goddesses and Haiti Kanaval.”, it’s easy to see why I’m more than a little curious at what Ada has to offer. Having previously worked for Alexander McQueen, Jonathan Saunders and Gareth Pugh before setting up her own label, its probably a fair assumption that her ethical and sustainable designs will be undoubtedly intelligent and inspired as she uses her own unique illustrations to create individual and distinctive ready to wear pieces.
Judging by her AW11 collection 'The Cryoflux', there is to be no skimping on the visuals either as the makeup speaks as loudly as the clothing to reflect the collection’s core concepts. With last season’s ghostly countenance echoing the cold-as-ice palette, what am I expecting this time round? Well, if seahorses are anything to go by then I’m hoping for metallics, ocean blues and the occasional crustacean to boot. However, to second guess such a bold new designer would be futile which is exactly why i’m so eager to find out for myself. 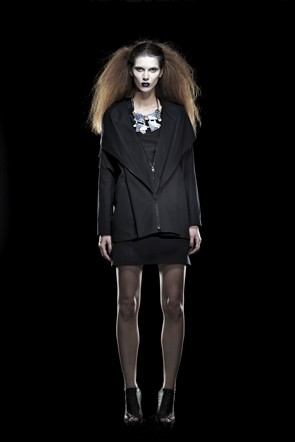 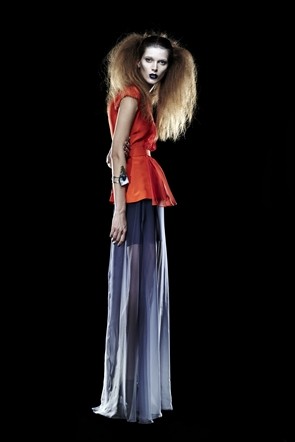 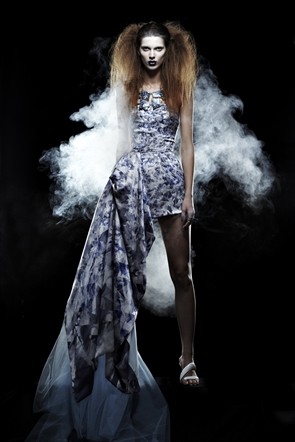 
ASHISH: Saturday 11.00am Somerset House
The current guest style editor for ASOS online and fellow lover of all things sequined, flamboyant London based Ashish Gupta is sure to brighten up my no doubt over cast Saturday. And despite his SS11 collection providing an amalgamation of cowboys and Indians via a southern California pit stop, his 2012 ensemble is set to take a more enchanting approach as he seeks to channel holiday romances and far off places. Ashish is a brand that doesn’t take itself too seriously but thats not to say that we should take it lightly. Debuting his first collection in 2001, this year marks a decade for Ashish at fashion week and i’m sure the spectators will not be disappointed at his celebration. 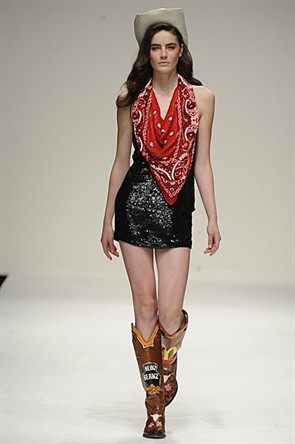 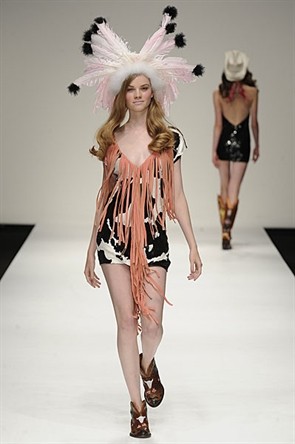 Hailing from my neck of the woods, or near enough for me to at least feel a geographical connection, is Craig Lawrence who’s twitter description simply reads: “I knit lots of things.” And that he unmistakably does as his collections involve a curious process of knitting with unconventional materials to create voluminous, fluffy and shiny knitwear. And I’m talking the kind of knitwear that Tilda Swindon effortlessly drapes herself in for editorials, not the dodgy jumper you received from Granny at Christmas – though for some trendy London and, more noticeably for me, Leeds, types they’re probably on a style par. The reason am I so excited for this gentleman’s work may also have something  to do with the following two words: knitted crystal. Oh yes, Craig’s most recent accolade is his new season’s sponsor, Swarovski. 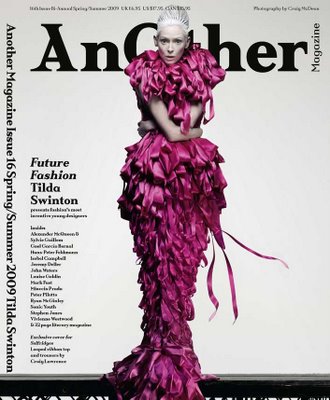 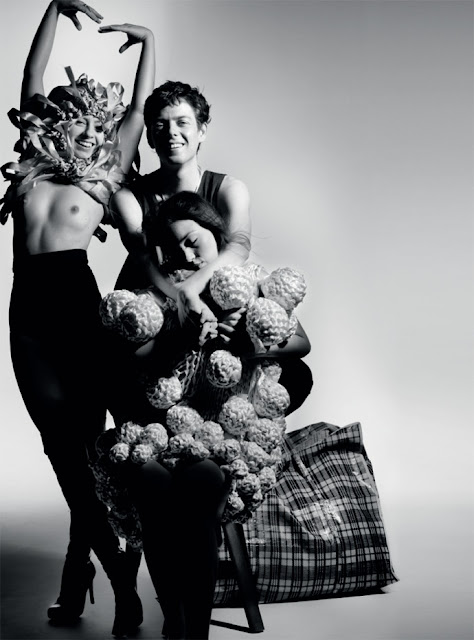 Image courtesy of ID
After being papped for Glossy Box UK at last week’s Vogue Fashion Night Out, I was crowned the ‘stylish winner’ of their street style competition and will now receive a year’s subscription to their monthly beauty boxes. However, as it stands, my outfit choices for the week ahead are non existent. However, you can probably expect to see my bowler hat make an appearance at some point along with my electric blue heels. Not exactly on trend but they’re a bit of fun amongst the sea of simplistic blouses and shift dresses. Then again, I’ve heard stories from the Jack team about a girl who turned up dressed to the nines and walking 6 Chihuahuas around the square in the hope of being photographed so simplicity is not to be sniffed at. There will also be a street style blog on the go along side the day’s most notable trend and even a food diary so be sure to keep an eye out on Who's Jack and be sure to follow me @littlemyth