In precisely 5 days and a little under 6 hours (not that I’m counting) the most anticipated event this side of fashion week will be boasting a Central London backdrop as High Street meets High End for Vogue Fashion's Night Out. For the third year running, high-heeled fashion pariahs, wannabes, has-beens and never-will-bes will flock in their impeccably dressed droves to Oxford Street, Carnaby Street and every road in between to partake in the buzz of what is sure to be the talking point of the fashion calendar. Of course, it would be impossible for me to document let alone attend each and every one of the extravagantly laid out revelries and sample even a percentage of the evening’s canapés and Hors d'oeuvres, therefore I reluctantly confine myself to suggesting but a few and let you in on where I, and my tiny London compadre, Sophia, will be celebrating the night.

Let’s start big. And you don’t get much bigger than Sophia’s favourite department store, and Oxford’s Streets main contender, Selfridges. If I’m to be entirely honest, the lazier amongst us could stay here all night and simply move from floor to floor and still come away feeling like they embraced the full experience. There is simply so much going on at Selfridges I don’t know where to start. From Clements Ribeiro’s new capsule collection for the Museum of Everything to Michael Kors’ kiosks each containing luxury prizes including a trip to New York, let’s  take heed of the advise of our elders and start from the bottom and work our way upwards.  New brands Monki and high street favourites H&M will celebrate their first ever concession with giant 3D Monki’s, free lucky charm necklaces and style advice from those in the know. Advice from those willing to give it will prove invaluable as we head into the new season, whether it be what you’re wearing on your feet or face – which leads me to the beauty floor where Silsey and NARS will lead the way in ways to beautify your fair facade in the coming months. But a floor is but a number as Womenswear on 3 hosts Paige denim as they create an exclusive snakeskin wash for VFNO and rope in WAH Nails to provide matching snakeskin manicures. C’est Magnifique!

Elsewhere, in similar departmental territory, The T-shirt Customization Service returns to Harvey Nichols as designers including Jonathan Saunders and Peter Pilotto seek to transform any purchased Vogue Fashion’s Night Out T-shirt (RRP £18.00) into a truly unique, high end masterpiece.  But if the tshirt doesn’t set your eyes a flutter, I’ve heard of something that will: a complimentary eyelash application perhaps? Lucky for me (and my slight worry of glue near my eyes), my eyelashes are more than long enough to contend so I’ll just look on with my complimentary cocktail – the first of many as....

I certainly intend to make my way to a favourite of mine, Yves Saint Laurent, for Champagne and macaroons that would make Blair Waldorf green, pink and yellow with envy.  If your stomach can take it, the Hakkasan canapes at Diane von Furstenberg  and french delicacies at Agnes B will be more than enough to keep you satisfied – but please, do attend for the right reasons such as surveying the photographs of the world-renowned Martin Parr as the shop hosts an exhibition of his British Life works from 6pm. 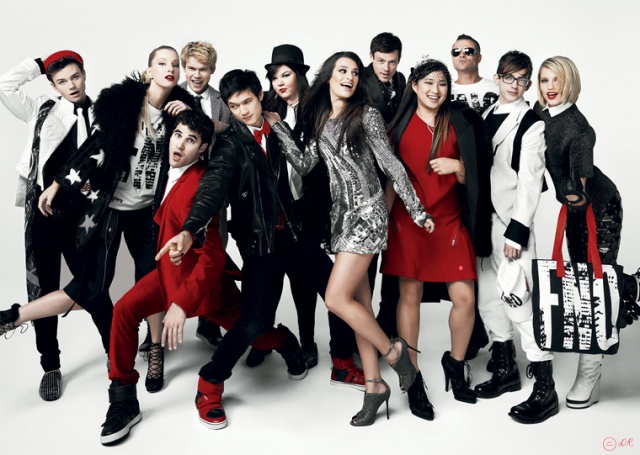 Now, entertainment is available on every corner and don’t worry I’ll get to it, but let’s not let it cloud the real opportunities at hand. After all, it’s not every day the whole of London is invited to an exclusive launch such as that hosted by Gwyneth Paltrow and Vogue’s own Alexandra Shulman at Coach on New Bond Street as it unveils its fresh Flagship Boutique.  However, it is Liberty that catches my eye as  they seek to provide the summer we Brits never had with the erection of a one-night-only 'Honolulu lounge' where designers such as Jonathan Saunders, Richard Nicoll and Simone Rocha will be on hand to talk visitors through their latest collections accompanied by  fashion commentator Lulu Kennedy styling customers in the Lulu + Co AW 2011 collection to be launched that evening. Nearby in the luxurious surroundings of the Liberty scarf room, a popular theme of the night, paparazzi, will be in full swing in the visitor’s photobooth where one can be snapped under a Vogue masthead. The photography theme extends outwards too to DIOR who are, quite literally, driving the festivities with their own Miss Dior black taxi photo booth on New Bond Street. Here we can play dress up with a Miss Dior bag whilst you pose for your photo or alternatively head on to Alexander McQueen to acquire a bag of your own as they hand out a limited number of FNO2011 keys containing a code to unlock many young ladies’ fashion aspirations as they offer the potential to win the Folk Tote McQueen's latest iconic handbag. This is sure to be one the most popular locations of the night so i wouldn’t wait around.
Expect a celebrity spot as the quintessentially English Mulberry are hosting what is shaping up to be one of my potential highlights as they evoke the spirit of the local village fete you never had with a fortune teller and live music as well as manicures and prize draws every twenty minutes or so. Also worth a look in will be the Metronomy DJ set at Paul Smith, but then again i’m always a little let down. Personally, I’ll be steering clear of Topshop (it’s bad enough on a regular day around this time) and Urban Outfitters who are merely offering the possibility of a discount. In Leeds they used to have drinks, DJs and food so I’m hoping this is but a failure to update on their info for the real celebrations. Either way, dressed to impress, Sophia and I will be making our way through the heaving streets and will be reporting back on our findings.
Posted by littlemyth at 05:31