With a large pile of fit-inducing television sets all flashing images to the sounds of Kanye West’s ‘Hell of a Life’ blaring whilst a scantily-clad skeleton sat casually on an unmade bed, I’d be lying if i said  the installation at Somerset House hadn’t got me looking forward to seeing Katie Eary’s ss12 collection in the flesh at The Riverside Rooms, London. 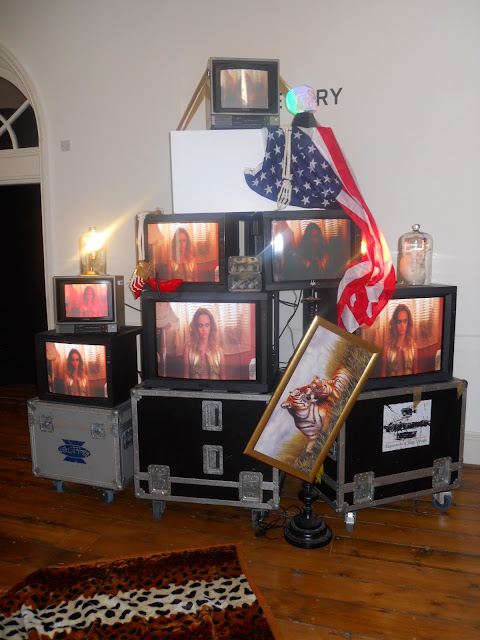 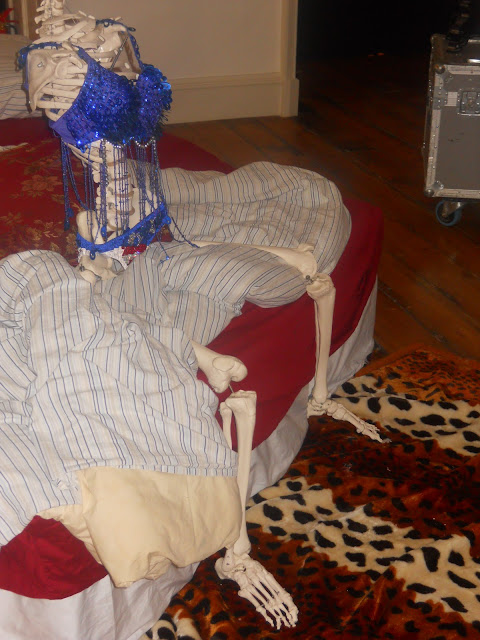 The film focuses on Eary’s ‘Fear & Loathing in Las Vegas’ collection for next year’s spring/summer season, bringing her trademark aesthetic to the small screen. In amongst the blaze of night-vision greens and violent red lights emerged Eary’s vision of a ‘Winter-in-Summer’ look, laying bare our survival instincts to clash the atmosphere of the arctic with the heat of the dessert in a collection based on the aesthetical paradox. Inspired by soldiers from the French Legion to the hallucinogenic narcotics of Vegas,  Eary juxtaposes a myriad of influences to produce a SS12 that’ll turn tradition on its head.

Arriving just in the nick of time after following some of the worst directions known to man, I found myself sat in an intimate room eating a Ferrero Rocher across from Kanye West. As you do…
It was one of those times that you wish the gale force winds outside hadn’t given you a hairdo akin to a mullet and that you weren’t stuffing your face on the freebies. But after I was done chomping on glorified Nutella, I gave Kanye, who was now looking my way, a small salute which was returned with a shy smile and a nod. Shy? Kanye?  Looking to his right, I then noticed his resident bag carrier Mr Hudson sat alongside ready to enjoy the show that was actually using Mr West, once again, as its backing track. Coincidence? No, probably not. 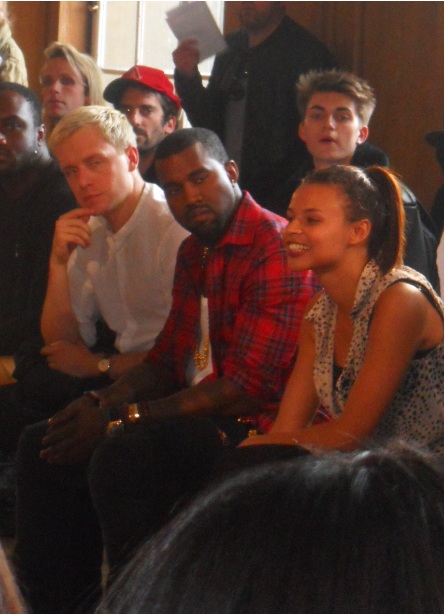 The show began revealing a palette of burnt copper, mustard, cheetah print and gold lame metallics on a series of tshirts and anti fit trousers to reflect the bizarre and brave world of a debauched Las Vegas. With the occasional strut of predominantly ostrich feather and partially sheer womenswear passing by to reveal a very much exposed bottom or two,  it was back to the array of lace up trenches, foiled denim and open air knits accompanied by neon orange wicker luggage and Dutch hood falconry headwear.

Taking to the walk herself, Katie Earey received flowers from her orange-clad leading man as she gratefully thanked the audience for a rapturous response to her edgy and unusual collection. 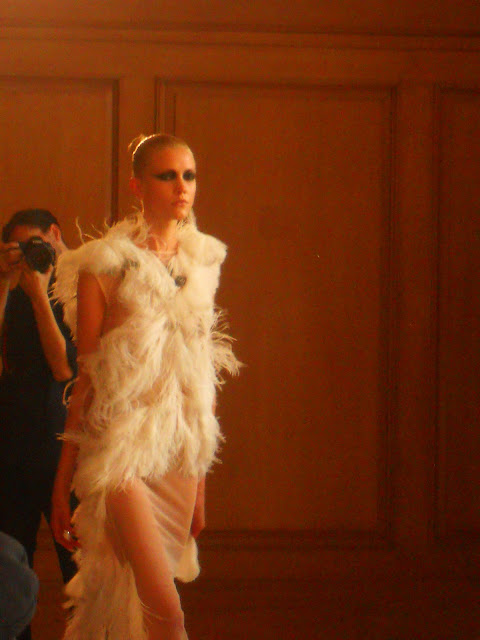 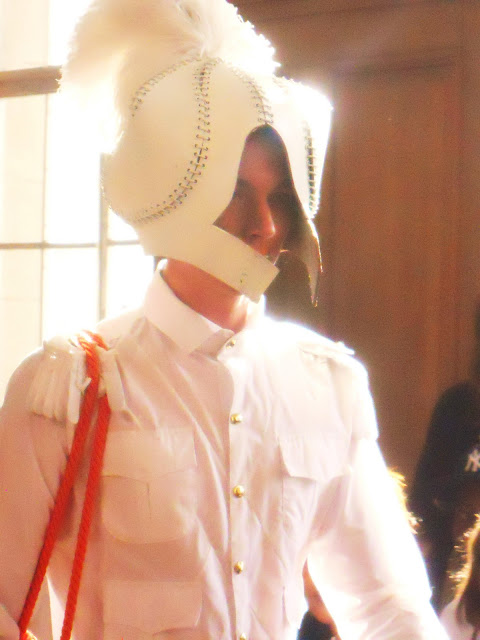 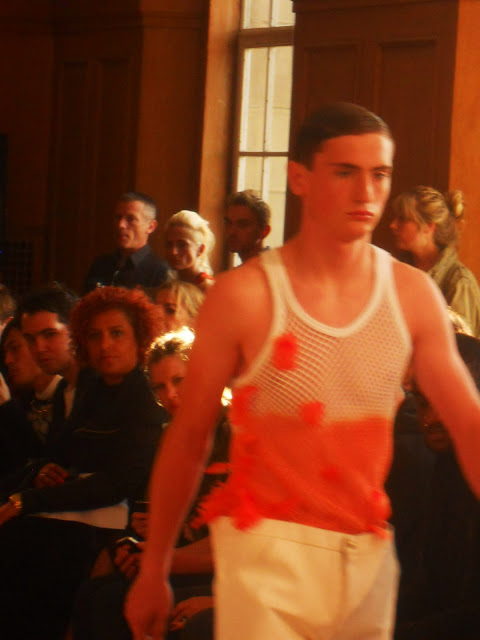 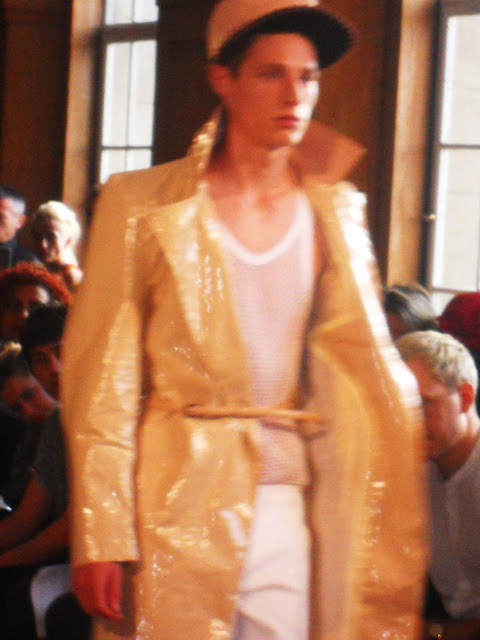 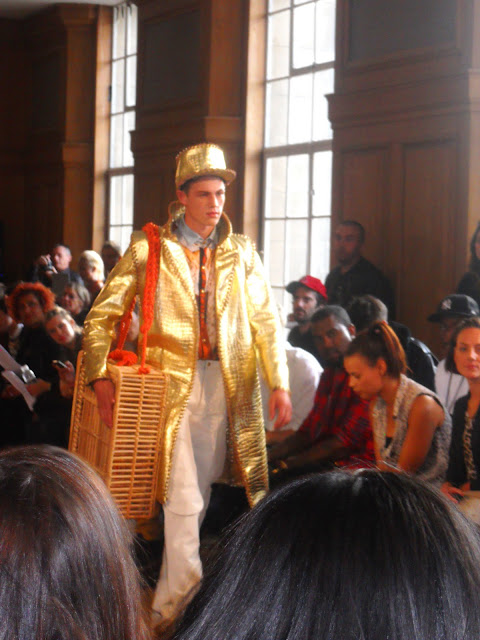